3 Years and Planting In Madisonville

Communities are at the core of Taking Root. The loss of trees due to invasive plants, insect pests and unenlightened development have left some Tri-state communities feeling bare. Trees can reduce energy bills, reduce ground water runoff, increase property value, and make a community healthier along with various other benefits. To infuse the idea of planting trees into more communities, Taking Root held its first Great Tree Summit in 2014 with great success and hopes to recreate that success with the upcoming 2017 summit which will highlight our communities.

The Taking Root Madisonville team is an example of a community team that stemmed from a breakout session at the first tree summit and whose inspiration has led them to plant over 175 trees since then. The team began to spread its initial roots by sending out an open invitation to the neighborhood to gage interest and developed a core team. The original team consisted of 7 members: Tim Daughety, Linda Ford, Joan Willis, Karen Brown, Steve Johns and Gayle Ficken-Clarke. Each brought something unique to the table. They initially met once a month but changed to meeting bi-weekly as their first planting event drew closer. As time progressed each team member began to find their niche and filled a key role. For example Daughety and Ford are involved in supplies and coordinating the students from 7 Hills High School, Karen is the horticulturalist who guides homeowners on where to plant and the type of trees available and Joan is in charge of coordination and logistics of the event. Knowing who does what, was and is a key aspect to the team’s sustainability. 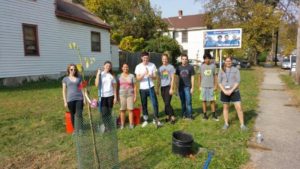 In the first year, the Madisonville team was able to coordinate the planting of 35 trees obtained from Cincinnati’s Fall ReLeaf program. It was a great success for the community. 7 Hills High School Students were involved as well and were able to contribute to the community and learn more about the neighborhood while having fun. A favorite memory of Ford was seeing the students climbing into the vans with smiles on their faces as they prepared to plant trees. The success of the event was attributed to the coordination and diligent work of the entire team. Together they came up with a timeline on what they needed to accomplish. For example, the week of the event, they would prepare mulch buckets and get a U-haul to pick up the trees. The night before the event they would label each tree with a number that corresponded to which area it was going to be planted at and the morning of the event, they would drive the trees to those locations. Since kids were taking part in planting the trees, supervision at each site was needed. The team set up a system where adults were given an address of the planting site so that they could be there to supervise when the kids were dropped off. The vans that they used to drop off the students and carry the tools were provided by the Seven Hills High School and each driver was provided emergency contact information if any of the groups had questions.

Over time this system became increasingly efficient. They were able to meet less often while increasing the amount of 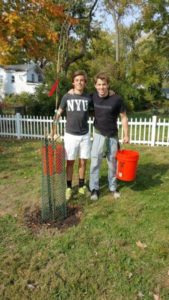 trees they planted. The team went from planting 35 trees the first year to 65 and 73 for the past 2 planting events held on National Make a Difference Day. Along with the Fall Releaf program, they now get trees from the Civic Garden Center, Natorp’s and Bloomin Garden Center.

For Madisonville, these events are more than just planting trees. They enjoy the friendship and connections they’ve made over the years and “getting pumped” while tagging trees the night before the event. When asked how to recreate this success in another community they had three points: have a good nucleus of people to work with, continuity from year to year and accountability in those you work with. While the team does not want to increase the number of trees next year due to resource constraints they are planning on continuing the annual event and are also open to giving advice to other communities who are interested in learning more about how they organize a tree planting event in their community. For more information about planting trees in your community contact us at mstenger@takingroot.info.